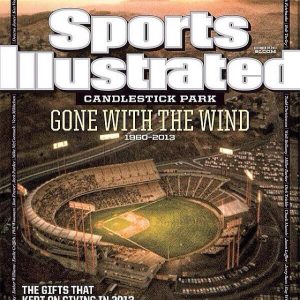 The following is a guest post from Life Letter Cafe blog.

Candlestick Park was opened in the Spring of 1960, in the vicinity of the Hunter’s Point shipyards of San Francisco . .

It has been home primarily to the San Francisco Giants and 49ers over most of that fifty-three year span of time. When 49er linebacker NaVorro Bowman executed what is now called The Pick at the Stick this last Monday evening, sealing a victory over the hapless Atlanta Falcons, fans and historians began to bid farewell to the outdated, yet iconic stadium which will be remembered not so much for it’s luster or immediate location, but for the sports memories that unfolded in it’s windy and often brutally cold confines.

There have been plenty. Few will ever forgive Bobby Richardson for catching Willie McCovey’s liner to win the World Series on October 19th, 1962. The mild-mannered pitcher Juan Marichal went after Dodger catcher Johnny Roseboro with his bat on August 22, 1965 . . an incident he profoundly regrets. Perhaps the most bitter pill ever swallowed at the Stick was on July 29th, 1990 when Giants starter Scott Garrelts was denied a no-hitter with two outs and two strikes in the bottom of the ninth by the clutch hitting of Paul O’Neil of the Cincinnati Reds.

Too many to recall in this post, but who could forget April 12th, 1993 when Barry Bonds homered on the first pitch in his first home at bat as a Giant against the Florida Marlins? Or how about January 5th, 2003 when the 49ers came back from 24 points downs to defeat New York football Giants 39-38 in a thrilling win led by Jeff Garcia that is to this day regarded as the loudest game in 49er history. Little more needs to be said than Joe Montana, Dwight Clark and The Catch to upend the football juggernaut Dallas Cowboys (Tom Landry, Roger Staubach) on Jan 10th 1982. Cubs fans will never forgive Will The Thrill Clark who single-handedly beat them for the National League pennant in October, 1989.

While the act of sports competition holds little eternal significance in and of itself, Candlestick Park’s unique history offers valuable leadership lessons for pastors . . here are the first 6 that quickly come to mind:

What are your thoughts? CLICK HERE . . to look at the final 6 lessons on leadership afforded by the iconic Candlestick Park!