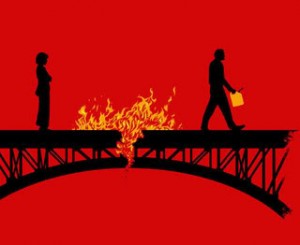 In light of my last Church Leadership 101 post on being fired, I’d like to follow up with a simple philosophy I’ve tried to live by: never burn bridges. When I have felt God leading me somewhere else and resigned from a church, I’ve bent over backwards to make the transition as smooth as possible.

I’ve always worked with key volunteers in my ministry that would carry the load until the church replaced me. I thought it was important to set them up to win and show them everything I did, where I kept stuff, where I ordered stuff from, how I planned, scheduled and organized and anything that I thought they’d need to know after I left.

This speaks to one’s character and to a Kingdom mindset. We’re not competing and other churches are not the enemy. Even if I (or you) leave a church, I want them to succeed and do well in my absence – they are a part of the Big “C” Church and I’m all for their continued success.

If for some reason you find yourself fired or being let go, you have a wonderful opportunity to live out this principle of not burning bridges and show them you have class. I worked with a youth pastor one time that got fired and acted like a complete moron afterwards. He kept the church keys and wouldn’t turn them back in (we had to change the locks), he kept his pager (yes, we had pagers back in the day) and he threatened to storm the pulpit on Sunday and “tell his side of the story” (we had to post police officers at all entrances). In the end, he looked like a jerk and people really questioned his mental stability. Best advice: don’t go there. Turn in your keys, pack up your office and leave with dignity.

How have you handled transitions in your career? What do you think about burning bridges?