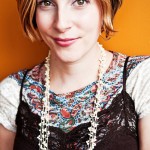 The following is a guest blog from Anne Jackson, author, speaker and and social change activist – Nashville, TN

I never thought there was much difference between reconciliation and forgiveness. In my heart, it all kind of meant the same thing, letting go of pain that someone had inflicted on me. Usually this involved some type of making up process involving apologies, sometimes tears, and a hug to make everything alright.

Twelve years ago, somebody hurt me in a very painful, inexcusable way. For years, I didn’t allow myself to work through the pain as I needed to. A couple of years ago, circumstances (which were mostly out of my control) caused me to stare at this wound square in the face.

As strange as it sounds, I’ve never doubted that I forgave this person. I feel fortunate that, for the most part, forgiveness comes easy to me. There are probably only two situations in my life where I know I still need to work on forgiving someone, but this particular hurt isn’t one of them.

However, as I was processing through healing during this time, I began questioning if i really had forgiven this person. Sure, the scabs had been peeled off and the wounds were fresh, and it hurtâ€¦badly, all over again.

Someone who was helping me through this sent me an email. He encouraged me and said that what I was experiencing wasn’t me being bitter or holding on (which was what I was afraid I was doing) but that I was desiring reconciliation.

I wanted for this person to own up to the mistake and for everything, painful as it would be, to be okay again.

And I wanted for the relationship to be harmonized and restored completely.

Later, I read this in a book:

Joseph was reconciled with his brothers when they came to Egypt in search of grain. By the time his brothers reached Egypt, he was able to stand before them and confront them because he had no inner feelings that would keep him from having a relationship of unity and peace with them.

Forgiveness is unilateral. You can forgive even if [someone] never admits [their wrong doing], is never sorry, and never changes. But reconciliation requires both people’s commitment to recovery, honesty, repentance, forgiveness, and communication. Even then, reconciliation is a long and difficult process of breaking down barriers and building trust.

You may not ever be reconciled with a person that hurt you (or that you hurt).

That part takes both people to work through.

Forgiveness is a necessary, but not a sufficient condition for reconciliation.

However, forgiveness is a decision that you make, and continue to make, regardless of the other person’s choice.

And through the cross and grace and love, you can.