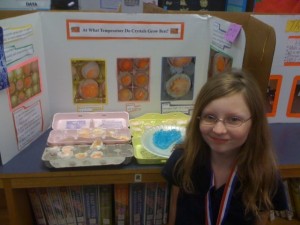 My children are a joy and blessing and it’s an honor to raise them. They are all bright and excellent students. My daughter, Grace, is the oldest – she’s 10 and in 4th grade. Last week she took 3rd place in the school Spelling Bee and gets to go on to the regional spelling bee to represent her school. 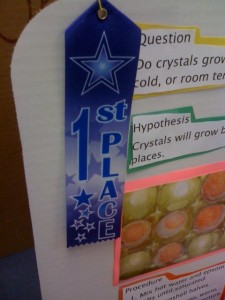 Two nights ago, we were at her school for the “Math and Science Night” and were proud and surprised to see Grace get awarded First Place in the school Science Fair for her project (my other two kids are too young to enter the Science Fair). Grace grew crystals in warm, cold and room temperatures. She found that crystals grow best in warmÂ temperatures.

I had a great opportunity and teachable moment with Grace as she was working on her science project. We did the display together and I encouraged her along the way. There were two things that Grace and I didn’t see eye to eye on and I believe actually were a big part of her winning. One, was Grace didn’t want to include the Application of what she discovered (seen below). 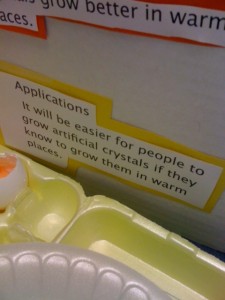 I told Grace that in communication, speaking and preaching terms, the application was the “So what?” It’s one thing to share information. It’s another thing to reach a conclusion. It’s another level to actually learn from your experience or study and form a practical application that can help others. I told her to include the application (as you see above) and I believe that stood out from the many other projects we saw that ended with the Conclusion.

Lesson one was the “So what?” and the importance of application in communication. Lesson two is to celebrate the win and share stories. People want to actually see what they’re giving to. Don’t just ask for money to pay bills. Show pictures, videos and testimonies of lives changed. Let them see what they’re a part of and accomplishing as a local Body of Christ.

If Grace had left her crystals at home and not included the Application piece of her project, I don’t think she would have won First Place.

Pastors and teachers, I encourage and exhort you to not just exegete Scripture and share information, but actually show people how to live out what they learned from Scripture. Communication Directors, Tech Pastors and Video Editors/Producers, I encourage you to tell stories that move people and show them what they’re a part of.

What are some lessons you discovered with the help of your child?