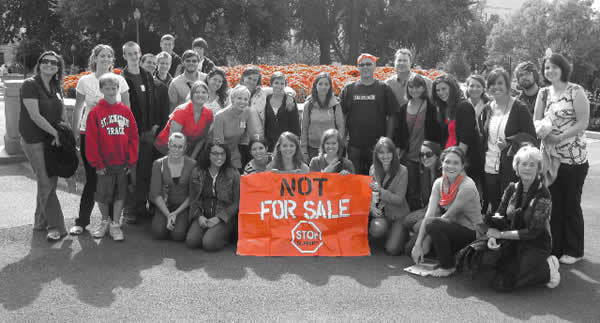 Are you orange?Â ORANGE IS THE COLOR OF FREEDOM.Â Wearing orange shows you’re a part of the movement to stop slavery.Â

Also, I had a great phone conversation with Charles Lee from JustOne this week. They are working on some wonderful initiatives to raise awareness and support for some causes that the Church should take seriously. We’re meeting where they headquarter for the Church 2.0 Local Forum in Portland on Nov. 7th. I look forward to hearing more about their ministry as they share at this gathering.

Here are some facts that were printed in my church’s bulletin this past Sunday: The modern practice of human trafficking enslaves 27 million people around the world. This is more than at any other time in history. UNICEF says that most children who are trafficked are “sold” by unsuspecting parents who honestly believe that the children they have just “sold” (most for under $5) will be educated, learn a trade, and be carefully looked after by their new “caretaker” (human trafficker).

Little do the impoverished parents know that their child is likely to be sold several times, moved to other countries, and will become virtually untraceable. The United Nations office on drugs and crime has estimated that the total market value of illicit human trafficking is more than $30 billion dollars per year – a third of this profit coming directly from the sale of individuals.

This is not simply a problem on a foreign shore: there are more slaves in the United States today than ever, including the era of American slavery and the Civil War. The Coalition to Abolish Slavery and Trafficking (CAST) reported that every ten minutes, a woman or child is trafficked into the United States and forced into labor. The CIA recently reported that as many as 50,000 women and children are brought into this country every year under false pretenses and then forced unwillingly into roles as abused laborers, servants, and prostitutes.

*** I blog about this because this is a huge part of Church 2.0. Church leaders in the 21st Century have to be aware of and battle against social justice issues. What can you do?

(Most of the info about trafficking came from the October issue of Relevant magazine, pages 55-56)
Â
*** Not For Sale reports that “last week, 150 Abolitionists from across the country gathered in Washington, DC to advocate on behalf of the 27 million people in slavery around the world…Â To close out this fantastic event, Abolitionists held a candlelight vigil before attending a premier screening ofÂ Call + Response, the new independent film that features the work of Not For Sale and its president David Batstone alongside critically acclaimed artists and prominent cultural figures.”
I saw Call + Response earlier this week. WOW>such a good film. Very well done. Amazing music. Very informative. Very moving. A must-see!