The following is a great (and informative) video that Maurilio, from The A Group in Nashville, showed at the BUG Conference. I’d love to hear your thoughts on it. 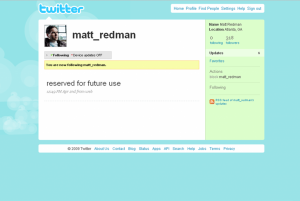 You may have never heard the term (I havenâ€™t and neither has Wikipedia), but Iâ€™d like to introduce you to it: digital real estate. Itâ€™s a term that I use often and think more people ought to be talking about.

To me, digital real estate is when you (as an individual) or your church or ministry claims your name on the web. A long time ago I went through all the social media and social networking sites and grabbed up the name â€œGreg Atkinsonâ€. My blog is GregAtkinson.com, my Twitter is @GregAtkinson, etc.

Do you have your name reserved on various websites? Have you claimed your churchâ€™s name? There can only be one Grace Community and one Hope _______ and one Calvary _______. Whatever your churchâ€™s or organizationâ€™s name is, itâ€™s important to grab it before someone else does.

Hear me, I donâ€™t mean this in a vicious, beat out another Grace Baptist way. I mean someone else (not a church) could grab that name and do horrible things with it â€“ really misrepresenting you and your church. Earlier this week I was speaking at the Bug Conference in Birmingham and heard horror stories from Maurilio Amorim, owner and president of The A Group in Nashville. 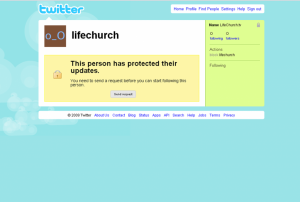 Thatâ€™s why you see LifeChurch.tv (left) and Willow Creek (below) have already grabbed up their Twitter names, though they are not yet using them. 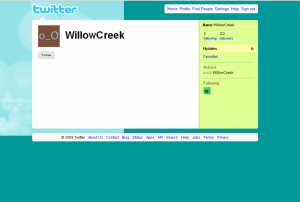 Did you know Rick Warren had 5000 followers before his first tweet? Someone on his staff (or him) grabbed the name and held it in-case Rick wanted to start twittering. Rick is now twittering and is quickly approaching 10,000 followers. His first tweet is below:

@RickWarren â€“ 2 tweet or not 2 tweet? I fear the narcissistic possibility, but canâ€™t pass up any tool to encourage you! Jumping in! .

And so he dove in. At the time of this writing, Rick has 14 tweets. The point is all the people you see above, including worship leader Matt Redman, grabbed their name â€“ they, whether they realized it or not, practiced the rule of digital real estate and claimed their territory.

Maybe you, your pastor or your church isnâ€™t into all this social media and social networking stuff. Whoâ€™s to say that you wonâ€™t be in a year or six months? Why not go ahead and grab your space now, so as to reserve it in-case you change your mind?