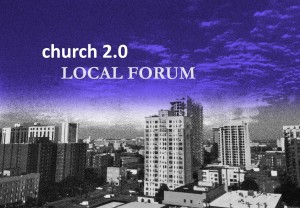 Yesterday I announced the beginning of the Church 2.0 Local Forum. I’m excited about the first 2 of these in May (one in LA and one in Chicago). For now, I’d like to give you more info on the first one in LA. This is for all Church leaders in the Southern California area. If you’re involved in ministry and would like to meet, network and share with others in ministry – this FREE event is for you.

DETAILS: We will gather on Friday, May 2nd from 11:30am to 3:30pm in Grant Hall at Hollywood UMC. I’d appreciate you signing up so we know how much lunch to provide. To RSVP go HERE.

Sponsors that have taken care of the facility rental, free give-aways/swag and free food for all are: eight20eight, iStockphoto, RevoStock and SermonSpice. I’m extremely grateful for their support.

Here’s a special note from sponsor iStockphoto: Enter the coupon code FAITH and you will receive a 20% first purchase discount on any order over 55 credits and you can also choose 20 FREE images out of a group of 50. Go HERE to check it out. 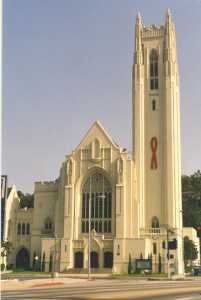 WHAT’S SO COOL ABOUT MEETING AT HOLLYWOOD UMC?

Due to the unique beauty of the buildings and the history emmanating from their individual spaces, the church facilities are often used as a film and television location and have been featured in several major motion pictures.

SPECIAL FOOTNOTES FOR FILM FANS –
In Back to the Future, the church gymnasium was the location for the high school prom/dance scene where Michael J. Fox reunites his parents and takes the stage to perform a wicked guitar version of â€œJohnny Be Good.â€

In Sister Act, virtually the entire church served as an on-location set for the story of Whoopi Goldberg posing as a nun. The scenes where the nuns ate at a long table and where Whoopi was scrubbing floors were filmed in Grant Hall. The scene where the nuns were gossiping in the kitchen over ice cream was in the Main Kitchen. The choir room in the movie was shot in the churchâ€™s actual choir room at the time.

In Tom Hanksâ€™ That Thing You Do!, the gym stage was the setting for a college talent show where the movieâ€™s fictitious pop-rock group, â€œThe Wonders,â€ first sang their hit song â€œThat Thing You Do!â€ in public. In the scene, the groupâ€™s drummer surprises them by speeding up the tempo of the song, with very positive results.