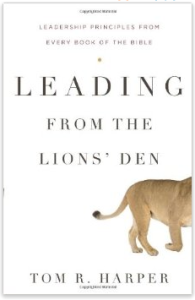 I’m taking a break today to finish writing my next book. Today’s blog post is a guest post from Tom Harper. Tom is president of Networld Media Group, a publisher of online trade journals and events for the banking, retail, restaurant and church leadership markets (including the blog www.ChurchCentral.com). He is the author of Leading from the Lions’ Den: Leadership Principles from Every Book of the Bible (B&H). Here’s his post:

â€˜Who is left among you who saw this house in its former glory? How does it look to you now? Doesn’t it seem like nothing to you? Even so, be strongâ€¦’, Haggai 2:15

It turns out there is an association dedicated to saving companies from the edge of death: the Turnaround Management Association.

TMA’s Web site describes their purpose: Executives who run into corporate troubles often go through the same processes that dying people do: denial, anger, bargaining, depression and then finally acceptance. The last stage is when corporations hire turnaround professionalsâ€¦.

The prophet Haggai faced his own turnaround challenge. The temple’s foundation had been built with great fanfare sixteen years earlier, yet the excitement had fizzled and construction had waned.

To get things moving again, Haggai cleared off the temple’s original foundation and admonished the people for living in paneled houses while God’s house remains unfinished (Hag. 1:4). Disgusted at their luxurious living, he commanded them to rebuild. The glorious temple would only stand once again if they shook off their lethargy and grabbed their tools.

In one of TMA’s case studies, Oldfields, a £25 million London-based chilled foods manufacturer, suffered a sudden downturn in 2003. Its largest customer, representing 55% of its revenue, threatened to terminate its contract.

The turnaround hero, Joe Considine, quickly diagnosed the owner’s dictatorial style and lack of vision and relieved him. Then Considine did the following:

Oldfields went from losing £1.9 million in 2004 to a profit of £1.5million in 2006. It was soon acquired for £12.7 million. Perhaps Considine and his team’s greatest achievement was the preservation of 480 jobs.

Most of TMA’s success stories are similar, and they reflect Haggai’s own wisdom when faced with a massively lethargic entity. The overarching lesson is simple: People are reignited when a determined leader motivates them to clear away the rubble and rebuild from the foundation up.

— This post is from Leading from the Lions’ Den: Leadership Principles from Every Book of the Bible (B&H)